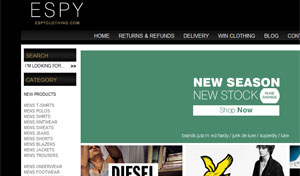 Although based in Central Scotland, our web design services are available throughout the UK. Espy Clothing is based in Surrey for example, one of several clients that our web designers have worked with in the Surrey area in the past 8 years.

The site was live for little more than a month before it was firing on the search engines and the site was attracting visitors and contacts from potential customers.

The site was one of our fast SEO successes, quickly growing as a recognised brand name, with traffic growing week-on-week. Despite our success, the client decided to use another company to take over the SEO mantle, after 8 months. At the time that we stopped looking after Espy, the site appeared on the front page of Google.co.uk and Yahoo for thousands of search terms, (being found on google for 4700 different search terms in one month), including:

Most eCommerce websites that that we design, give a full return on investment within 4 to 8 months and the clients traffic increases month on month, as does their reputation and brand visibility.

We are proud of the success we have helped Espy to achieve and we wish the company every success in the future.

To find out how the Kenkai Team can help your business to feature on the search engines for your Key Phrases, contact us now.